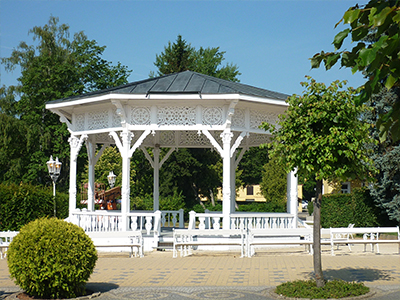 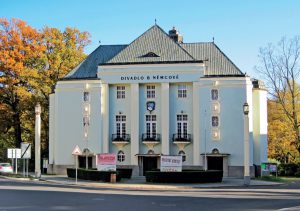 BOŽENA NĚMCOVÁ THEATRE
There have been theatre performances at the spa since just after its foundation, with the so-called “Theatre Shed”, a simple farm building that stood in Libušina Street at the back of the Social House, serving the purpose back then. The rent of this building was terminated by the municipal authority in Cheb and so the people of Franzensbad built their own stage, which they ceremonially opened in 1868 with Franz Suppé’s operetta The Beautiful Galatea. The original Classicist building was rebuilt in 1928, with the circumference walls of the old theatre being used as the foundations of the stage and auditorium and everything being surrounded by new walls. The building stands in this neo-Classicist form to this day. The theatre has a permanent amateur dramatics group whose modern history stretches back to 1946, when under the name of Lucerna it was officially registered by the Provincial National Committee in Prague. From then on it has gone from strength to strength, with the exception of a slump in the second half of the 1950s, and is an important part of culture in Franzensbad. The theatre is also home to MKS – The Franzensbad Municipal Culture Centre – an institution receiving contributions from the State Budget promoted by the town. The Municipal Culture Centre organises a whole host of social and cultural events and is therefore one of the main pillars of cultural life in the town. 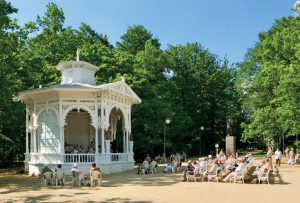 COLONNADE CONCERTS
Seasonal cultural events in summerhouses and parks, predominantly spa colonnade concerts, are an inherent part of cultural life at the spa. A popular place for such events is the summerhouse in the Municipal Gardens or in front of the Social House.

BRÖMSE GALLERY
The gallery was opened in 2003 as a benevolent society and is devoted to the conception and realisation of exhibition projects. It follows on from the spiritual and artistic legacy of Augustus Brömse, graphic artist, painter and teacher at the Academy of Fine Arts in Prague, who was born in Franzensbad in 1873. Exhibitions and other activities are concentrated in a number of places in Franzensbad. THE SMALL EXHIBITION CENTRE is found at 10 Poštovní Street, from where you can also access THE SWISS COURT EXHIBITION CENTRE. THE THREE LILIES SMALL GALLERY is found in Hotel Tři lilie. The permanent exhibits of the gallery include a ceramic model of the town in the “Beseda” building on the corner of Národní Street and Ruská Street.. 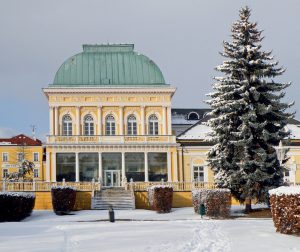 THE SOCIAL HOUSE IN FRANZENSBAD
The Social House is an integral part of Franzensbad. The Classicist structure of the large hall and main building was designed by the architect of the newly-created spa Ing. Rothhesel from Brandýs nad Labem. Its contemporaries would tell you that the sparkle of the ballroom outdid all similar buildings in the surrounding spas. A neo-Renaissance ballroom was added in 1877 to give the Social House the look it has to this day. The building took on the role of social centre at the spa, a place where all spa guests could meet around the table for lunch and dinner, spend their free time at the billiards table or relax with a spot of dancing at numerous dances and balls. The Social House fulfils this role to this day, with a whole host of social and cultural events staged here all year round.

MUNICIPAL LIBRARY
The history of the library in Franzensbad stretches back to the first half of the 19th century. The first written reference to it comes from Božena Němcová in 1846, when in Letters from Franzensbad she wrote that, “…There is also a lending library and reading room here…”. The library was based in Dr. Pohoreckého Street from 1960 onwards, but in 2009 it moved to new premises in Dlouhá Street next to the Municipal Museum. The library stages a number of events throughout the year for readers young and old and others too. It also offers public Internet access. 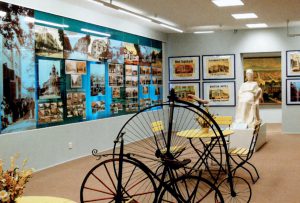 FRANZENSBAD MUNICIPAL MUSEUM
The first pages in the history of the museum were written in 1912, when a local civic action group collected historical items among the people of Franzensbad for a future local museum. This initiative was supported by the mayor of Franzensbad of that time, Eugen Loimann, who transferred the entire matter into the hands of the town, meaning that a museum was officially founded and set up in the “Aeskulap” building at 131 Americká Street. After the First World War the running of the museum was taken over by prominent regional scholar Alois John, who obtained display space in the Thirties and transformed the collection into an actual museum. The museum closed during the Second World War and the collections disappeared. Collection items were again gathered from 1957 onwards and in 1961 the museum was relocated to the building at 117 Dr. Pohoreckého Street. The museum moved again in October 2008, this time to a reconstructed building, originally the “Fire-fighting building” (Hasičský dům), at 194 Dlouhá Street not far from Swan Lake. Here you will find a permanent exhibition that looks at the history of the spa since the discovery of Franz’s Spring, the architecture, the history of balneological methods and the history of pharmacy. You can see the original statue of Little Franz from 1923 and other parts of the exhibition devoted to the personalities of Franzensbad and the history of tapping mineral springs. There are currently around 7000 items in the museum collection. 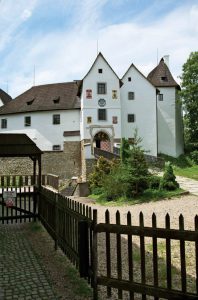 The Municipal Museum building is not the only place to see interesting artefacts, however: you will also find interesting exhibits at Seeberg Castle in the village of Ostroh some 5 km from Franzensbad towards the town of Aš. The current exhibition presents the development of interiors and furniture-making in the 19th century (Empire, Biedermeier, the second Rococo, neo-Renaissance, neo-Gothic, Chippendale), a “black kitchen”, inlaid Baroque and Rococo furniture, the rural areas of Cheb in the 19th century (ethnography), the history of porcelain and its current production. The former Knights’ Hall is now home to a ceremonial hall.