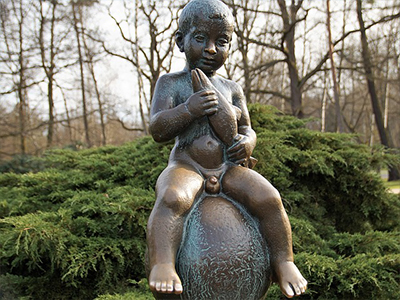 THE MANOR ( ZÁMEČEK )
This viewing tower was built as the second in Franzensbad during the First World War in memory of deceased mayor of Franzensbad and long-time chairman of the town Beautification Society Gustav Wiedermann. It originally took the name of “Dankwarte”, which is loosely translated as the “viewing tower of thanks”. The building was ceremonially opened on 16th April 1916 and from
the very outset fulfilled a number of roles. There was a modest restaurant on the ground floor, with quarters for the guard, who also made sure of the upkeep of the park and allowed access to the viewing tower, on the first floor. The surroundings were bare back then, and so the viewing tower offered views of Cheb and beyond it Dyleň and Zelený vrch, with its Bismarck viewing tower, the promontories of Smrčiny and the Ore Mountains and the hillocks of the Slavkov Forest. This viewing tower is obviously part of the distant past as it is now surrounded by far higher trees, meaning that most visitors to the stylish café of today have no idea of its original purpose. The Manor is located in the protected spa forest park known as the Gardens of Peace. The building was partially reconstructed and added to in 1975 and fully adapted as a restaurant facility.

THE STATUE OF LITTLE FRANZ
This was originally a park sculpture created in 1924 by Adolf Mayerl, a sculptor from Franzensbad, depicting a small boy with a fish. However, in 1950 it was relocated in front of the Social House, where female patients enjoyed being photographed with it, and thus it became the symbol of Franzensbad. Its popularity was helped by the legend thought up by spa photographer Mr. Škarda that every female patient who touched the big toe on Little Franz’s left foot would become pregnant. The original Little Franz is now on display in the Municipal Museum – the statue in front of the Social House is an imitation.

THE SOCIAL HOUSE
The Social House is one of the dominant features of Franzensbad and the most prominent public building from the time at which the spa was founded. Construction work got underway in 1793, with the Social House opening its doors in 1795. The Classicist structure of the large ballroom and main building was designed by architect Ing. Rothhesel from Brandýs nad Labem. The ballroom was at that time noted as one of the most magnificent in Bohemia and played host to many a prominent social event. The building therefore took on the role of a social centre where all spa guests could meet around the table for lunch and dinner, spend their free time at the billiards table or relax with a spot of dancing at the numerous dances and balls that were understood at that time as curative social treatment. Franzensbad officially became a town in 1865 and soon began to take on the dimensions of a world spa. For this reason the town council decided to build a magnificent new social hall. Gustav Wiedermann, an architect from Franzensbad, designed it in 1876 in the spirit of the age as a ceremonial neo-Renaissance structure with spacious interior, joining it to both older buildings. Building work was completed in 1877. The hall is to this day used as a place in which to hold conferences, balls and prominent social events, just as it was back when it was built.

CHURCH OF THE EXALTATION OF THE HOLY CROSS
Work began on the construction of the church back in 1812, when Emperor Franz I paid a visit to Franzensbad and released money from the church fund for its construction at the request of the municipal authority of Cheb. The church was completed in 1819 and from an architectural perspective is one of the most beautiful Empire religious buildings in Bohemia. The frescos inside the church are the work of the painter Kandler.

CHURCH OF ST. JAMES
The single-naved Baroque Church of St. James, with its front tower, was built in
Horní Lomany in 1740 after a fire at the old church. Franzensbad was part of the Horní Lomany parish back in the 19th century.

THE PROTESTANT CHURCH
A Protestant church in the historicising architectural style with a three-naved
basilica featuring elements of Romanesque, the work of Karl Haberzettl, a builder from Cheb. It took five years to build the church, which was consecrated in 1880.

THE ORTHODOX CHURCH OF ST. OLGA
This faithful imitation of Russian Orthodox architecture was constructed by Gustav Wiedermann, a builder from Franzensbad and later its mayor, who built similar structures in Karlovy Vary (Karlsbad) and Mariánské Lázně (Marienbad). The template for the Orthodox church in Franzensbad was a project by Russian architect Ober. The building was completed and consecrated in 1889.

THE SYNAGOGUE
The synagogue in Franzensbad was built between 1873 and 1875 in line with the plans of architect Karl Wiedermann as the corner building on today’s Americká Street. It was set alight by the Nazis in 1938 and the ruins were later cleared. There is to this day a gap between the buildings where the synagogue once stood, where a memorial has been placed.

MONUMENT TO EMPEROR FRANZ I
This monument, the work of Ludwig Schwanthaler, depicting the emperor
with a deed of foundation in his hand, was unveiled in 1853. It originally stood in the town park, was removed in 1920 after World War I for being a symbol of the Hapsburg Monarchy, and was again unveiled in the middle of Isobel‘s
Promenade in 1993.

BUST OF DR. ADLER
This marble bust of the founder of the spa by Karl Wolfert stands before the Salt and Meadow Spring Colonnade. A collection for its creation was started in 1893 by architect Gustav Wiedermann on the occasion of the 100th anniversary of the foundation of the spa so that he could then create the bust in his role of mayor. The memorial was unveiled on 20th September 1902 during celebrations to mark the anniversary of the independence of the spa community.

THE GOETHE MONUMENT
The monument was built in 1906 in line with the design of Karl Wilfert Jr.,
a sculptor from Cheb. The middle of the monument is home to a bronze relief
featuring a portrayal of the poet, marble statues on the right and left symbolise Beauty and Truth, and the side marble reliefs depict Lyricism and Drama.

STATUE OF EMPEROR FRANZ I ON A HORSE
This bronze statue was ceremonially unveiled on 7th June 2002 in front of the
Pak Café. It is a cast of the original that stood on Smetana Quay in Prague until
1918, when it was relocated to the National Museum. The statue in Franzensbad was cast by maestro Pavel Horák in cooperation with sculptor Olbram Zoubek.

MONUMENT TO JOSEF II.
This statue by Karl Wilfert stood on the square in Cheb from 1887 onwards, but was brought down twice after the First World War. It is somewhat symbolic that the statue lost its right hand, which held the Edict of Tolerance. It was subsequently relocated to the garden of the archives in Cheb and only after a long eighty years was it re-erected in Franzensbad.

MONUMENT TO FRANZ JOSEF I.
The statue is a cast of the original that was created by J. V. Pekárek for the imperial lounge at Franz Josef railway station in Prague and which was placed in the depository of the National Museum in Prague from 1918 onwards. The monument was ceremonially unveiled on 25th September 2004 in the presence of Otto von Hapsburg, Duke Karel Schwarzenberg and other prominent guests.

METEOROLOGICAL COLUMN
The column was created on the initiative of the local beautification society and was presented to the public on 15th May 1882. At the time of its creation the meteorological column was an important public information source for spa guests and the general public. The Town of Franzensbad, as the owner of the column, had it restored in 2008, returing it its original purpose and significance.

A CURIOUS VIEWING TOWER – SALINGBURG
This pseudo-Gothic structure is an imitation of a medieval castle. It was opened on 7th September 1906 in honour of the five hundredth anniversary of the first reports of mineral waters in the area of the spa. The castle has a 10-metre high tower with battlements and was also to serve as a viewing tower given that viewing towers were very popular at that time; other spa towns had viewing towers, but not Franzensbad. Of course the fully-grown trees and adjacent modern hotel mean that there is no longer a view from the round tower with battlements at all.