The town of Franzensbad was founded on the site of what is now Franz’s Spring thanks to the efforts of Dr. Bernard Adler, a doctor from Cheb, who won the support of Emperor Leopold II for its construction. The official date of the foundation of Franzensbad is considered to be 27th April 1793 – after all, it was on that day that Emperor Franz I approved specific designs for public structures created by Ing. Rothhesel. The idea behind the concept of a street village (from where the original name of Emperor Franz’s Village came) came from provincial building manager Abbot Gruber. The spa was then renamed “Lázně Císaře Františka” – Emperor Franz’s Spa, in 1807.The original street village, with Franz’s Spring, a wooden colonnade,several spa buildings, the Social House and today’s Národní třída  Street in the form of a spa promenade, was enlarged to include three parallel roads, meaning it took on the appearance of a town. Today’s historic centre was surrounded by a broad band of English parks that gave the village the appearance of a garden town. Other new streets ran around the circumference of the greenery and thus ensured the today’s look of a spa amidst greenery. The parks here were created from 1792 onwards, the creation of such spa greenery being an essential condition of the foundation of the spa. Martin Soukup, originally gardener to the duke of Lobkowicz, was invited to the spa. His son Anthony later continued his work by re-building the original Frenchparks with clipped shrubberies as more leisurely English-style parks. The rhododendrons that create romantic nooks in the parks have been grown here since 1828. Franzensbad was elevated to town status in 1865 by Emperor Franz Josef I and took on the dimension of a world spa after to its connection to the railway network. During its greatest period of boom at the beginning of the 20th century the spa was visited by up to 20 000 patients and almost 80 000 spa tourists a year. The spa experienced a further boom time during the pre-crisis period of the First Republic.
The spa was nationalised as a whole after the Second World War, seeing the creation of the state enterprise known as Czechoslovak State Spas and Springs. The number of foreign clients declined, but the high standard of doctors and medical staff remained. Building development came to a standstill, with spa facilities and spa buildings merely being updated. Then in 1991 most treatment facilities were taken over by the Lázně Františkovy Lázně limited company and individual private businesses began running new guesthouses and treatment facilities to great success. Franzensbad was declared an urban monument reserve in 1992, marking an entirely new chapter in the history of the town. 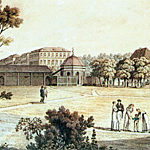 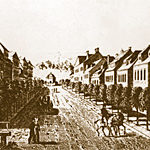 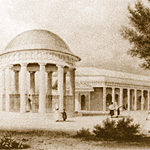 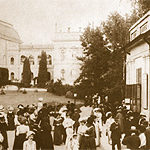 BOŽENA NĚMCOVÁ THEATER
There have been theatre performances at the spa since just after its foundation, with the so-called “Theatre Shed”, a simple farm building that stood in Libušina Street at the back of the Social House, serving the purpose back then. The rent of this building was terminated by the municipal authority in Cheb and so the people of Franzensbad built their own stage, which they ceremonially opened in 1868 with Franz Suppé’s operetta The Beautiful Galatea. The original Classicist building was rebuilt in 1928, with the circumference walls of the old theatre being used as the foundations of the stage and auditorium and everything being surrounded by new walls. The building stands in this neo-Classicist form to this day.The theatre has a permanent amateur dramatics group whose modern history stretches back to 1946, when under the name of Lucerna it was officially registered by the Provincial National Committee in Prague. From then on it has gone from strength to strength, with the exception of a slump in the second half of the 1950s, and is an important part of culture in Franzensbad. The theatre is also home to MKS – The Franzensbad Municipal Culture Centre – an institution receiving contributions from the State Budget promoted by the town. The Municipal Culture Centre organises a whole host of social and cultural events and is therefore one of the main pillars of cultural life in the town.

FRANZENSBAD MUNICIPAL MUSEUM
The first pages in the history of the museum were written in 1912, when a local civic action group collected historical items among the people of Franzensbad for a future local museum. This initiative was supported by the mayor of Franzensbad of that time, Eugen Loimann, who transferred the entire matter into the hands of the town, meaning that a museum was officially founded and set up in the “Aeskulap” building at 131 Americká Street. After the First World War the running of the museum was taken over by prominent regional scholar Alois John, who obtained display space in the Thirties and transformed the collection into an actual museum. The museum closed during the Second World War and the collections disappeared. Collection items were again gathered from 1957 onwards and in 1961 the museum was relocated to the building at 117 Dr. Pohoreckého Street. The museum moved again in October 2008, this time to a reconstructed building, originally the “Fire-fighting building” (Hasičský dům), at 194 Dlouhá Street not far from Swan Lake. Here you will find a permanent exhibition that looks at the history of the spa since the discovery of Franz’s Spring, the architecture, the history of balneological methods and the history of pharmacy. You can see the original statue of Little Franz from 1923 and other parts of the exhibition devoted to the personalities of Franzensbad and the history of tapping mineral springs. There are currently around 7000 items in the museum collection. The Municipal Museum building is not the only place to see interesting artefacts, however: you will also find interesting exhibits at Seeberg Castle in the village of Ostroh some 5 km from Franzensbad towards the town of Aš. The current exhibition presents the development of interiors and furniture-making in the 19th century (Empire, Biedermeier, the second Rococo, neo-Renaissance, neo-Gothic, Chippendale), a “black kitchen”, inlaid Baroque and Rococo furniture, the rural areas of Cheb in the 19th century (ethnography), the history of porcelain and its current production. The former Knights’ Hall is now home to a ceremonial hall.

Dr. Bernhard Vincent Adler
Doctor Adler from Cheb is a key personality in the history of Franzensbad and is rightly considered its founder. His name is first mentioned back in 1778, when he applied to the Cheb town council for a scholarship and confirmation that he had been disowned by his parents and relatives for transferring from the Dominican convent in Prague to study medicine in Vienna. He became the town doctor in Cheb after completing his studies. Adler soon began devoting attention to a neglected peat acidulous spring, “Slatinná kyselka”, today’s Franz’s Spring. Hygiene reasons led him to close the pavilion over the spring with a grille and run the mineral water into a retaining pool. This obviously met with the resistance of the mineral water carriers of Cheb, who rose up and under a banner made of bed sheeting bearing the words “One for all and all for one” made for the spring, where they demolished the pavilion. Over-excited women would even attack Adler in the street, calling him a “bread stealer”. The Cheb council kept out of the situation for fear of the women and so Dr. Adler went to Prague, where Leopold II was being crowned Bohemian king, and asked the emperor in a letter if he would take the spa under his protection. The emperor sent an investigation committee to Cheb and the town council, fearful of sanctions, itself suggested the creation of a spa.

Johann Wolfgang Goethe
If we count passing through and staying over one night, the famous poet visited Franzensbad a total of thirty-three times. He felt very good here and was always happy to return. It was during his first longer stay in 1808 that he fell in love with the 23-year old Sylvie von Ziegesar, daughter of the Minister of Saxony-Alternburg and privy councillor, but as was the case with Ulrika von Lewetzov the relationship came to nothing. During his stays Goethe would devote himself to studying the Chamber Hill (Komorní hůrka) volcano, again stirring up the scholarly issue of its authenticity. Goethe felt very good in Franzensbad – it allowed him the chance to engage in scholarly work and he loved the family atmosphere of the spa, where everyone gathered at the Social House round a common table and then on the promenade by the spring. In a letter to his wife he writes that, “I must be far more sociable here than in Karlsbad – it is one of the most beautiful places in the heart of Europe”.

Ludwig van Beethoven
Beethoven spent a total of four months in the Bohemian spas in 1811 and 1812.  He had himself written into the register of spa guests in Franzensbad on 8th August 1812 as a composer from Vienna, staying at the Two Golden Lions. We have learned from Beethoven’s letters that a monthlong course of treatment was a necessary evil to him. We writes to his publisher that, “Only the absolutely necessary – you don’t have title for the mass and I am tired of all the excessive bathing, doing nothing and other unavoidable events and coincidences”.

Franz I. and Marie-Luisa
Franzensbad was only visited by its founder, Emperor Franz I, on one occasion,
in 1812. His visit came when accompanying his daughter Marie Luisa, from
1810 onwards the wife of Napoleon, on her return from Dresden to Paris. In
Dresden they and a host of other crown heads of Europe attended a gallant banquet organised by Napoleon before his campaign to Russia. They arrived in Franzensbad together in the afternoon of 5th June. After settling into their  accommodation they had a look round the town and drank from the spring. The emperor explored Chamber Hill on the very same day. The special guests departed at half past six the next morning.

Božena Němcová
The famous Czech writer arrived in Franzensbad on 17th July 1846. She felt very good in the town, writing in her first letter that, “I have a delightful view of the hills from my room and it reminds me of my beloved home”. Her stay in Franzensbad was an ideal opportunity for Němcová to write and she captures her impressions of the unusual, sociallyinteresting environment in three feature stories in the form of letters to an imaginary friend Marie. In these she acquaints  readers with spa society and the excursion destinations in the area.

Franz Joseph I.
Emperor Franz Josef I, who elevated Franzensbad to town status in 1865, visited the spa in 1847 whilst still an archduke. He arrived together with his brothers Ferdinand Maximilian and Karl Ludwig, in whose honour the village organised rifle shooting in the park and a celebration featuring Bengal fireworks.

Johann Strauss
The king of the waltz visited Franzensbad in 1884 together with his wife Adele and daughter Alice. He returned a total of four times in the years that followed. One evening concert being played by the spa orchestra became a never-to-be-forgotten event for the audience when the conductor, Tomášek, invited Strauss to conduct his own waltz the Blue Danube. Strauss gladly obliged and was rewarded with rapturous applause.

Karl I. and Zita
The very last Austrian emperor, Karl I, met his future wife in Franzensbad in 1909 when the then seventeen-year old Zita came with her cousin Maria Annunciata for a therapeutic stay. A meeting was arranged by the mother of Maria Annunciata and the future spouses met at the Imperial spa house. Karl went to the spa the next year too and became so close to Zita that they married
in 1911.